Tomorrow will be
Vince, Artúr
name-day

John Amos Comenius (Czech: Jan Amos Komenský; German: Johann Amos Comenius; Latinized: Ioannes Amos Comenius; 28 March 1592 – 15 November 1670)[1] was a Czech philosopher, pedagogue and theologist. He served as the last bishop of Unity of the Brethren and became a religious refugee and one of the earliest champions of universal education, a concept eventually set forth in his book Didactica Magna. He is considered the father of modern education.[2][3] Comenius was the innovator who first introduced pictorial textbooks, written in native language instead of Latin, applied effective teaching based on the natural gradual growth from simple to more comprehensive concepts, supported lifelong learning and development of logical thinking by moving from dull memorization, presented and supported the idea of equal opportunity for impoverished children, opened doors to education for women, made instruction universal and practical. Besides his native Lands of the Bohemian Crown, he lived and worked in other regions of the Holy Roman Empire, and other countries: Sweden, the Polish-Lithuanian Commonwealth, Transylvania, England, the Netherlands and Royal Hungary.

John Amos Comenius originated from Moravian region of the Lands of the Bohemian Crown[4][4][5][6] in Uherský Brod (as on his gravestone in Naarden) or Nivnice, or Komňa, all of which are located in Uherské Hradiště District of today's Czech Republic. John Comenius was the youngest child and only son of Martin Komenský (died 1602–4) and his wife Anna Chmelová. His grandfather, whose name was Jan Segeš, started to use the surname Komenský after leaving Komňa to live in Uherský Brod.[7] (He was "the man from Komňa" = Komenský.) Martin and Anna Komenský belonged to the Moravian Brethren, and Comenius later became one of the leaders of that pre-Reformation Protestant denomination.[8] His parents and two of his four sisters died in 1604 and young John went to live with his aunt inStrážnice. 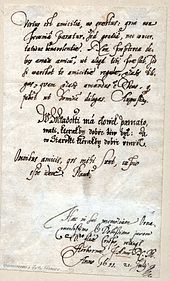 Oldest surviving manuscript by Comenius from 1611; written in Latin and Czech

Owing to his impoverished circumstances he was unable to begin his formal education until late.[8] He was 16 when he entered theLatin school in Přerov (he later returned to this school as a teacher 1614–1618). He continued his studies in the Herborn Academy(1611–1613) and the University of Heidelberg (1613–1614). In 1612 he read Fama Fraternitatis. Comenius was greatly influenced by the Irish Jesuit William Bathe as well as his teachers Johann Piscator, Heinrich Gutberleth, and particularly Heinrich Alsted. The Herborn school held the principle that every theory has to be functional in practical use, therefore it has to be didactic (i.e. morally instructive). In the course of his study he also became acquainted with the educational reforms of Ratichius and with the report of these reforms issued by the universities of Jena and Giessen.[8] Comenius' book Janua linguarum reserata (The Gate of Languages Unlocked, 1631) brought him widespread prominence and fame. However he and the Unity became special targets of the Counter Reformation movement and were forced into exile even as his fame grew across Europe.

Comenius became rector of a school in Přerov.[9] In 1616 he was ordained into the ministry of the Moravian Brethren and four years later became pastor and rector at Fulnek, one of its most flourishing churches. Throughout his life this pastoral activity was his most immediate concern. In consequence of the religious wars he lost all his property and his writings in 1621 and six years later[8][10] led the Brethren into exile when the Habsburg Counter-Reformation persecuted the Protestants in Bohemia.

Comenius took refuge in Leszno in Poland, where he led the gymnasium and was given charge of the Bohemian and Moravian churches. In 1628 he corresponded with Johann Valentin Andreae. In 1638 Comenius responded to a request by the government of Sweden and traveled there to draw up a scheme for the management of the schools of that country,[9][10] and in 1641, he responded to a request by the English parliament and joined a commission there charged with the reform of the system of public education. Thedisturbed political condition of England interfered with the latter project,[8][9] and so in 1642 he returned to Sweden to work with Queen Christina (reigned 1632–1654) and the chancellor Axel Oxenstierna (in office 1612–1654) on the task of reorganizing the Swedish schools. The same year he moved to Elbląg (Elbing) in Poland and in 1648 went to England with the aid of Samuel Hartlib, who came originally from Elbląg. In 1650 Zsuzsanna Lorántffy, widow of George I Rákóczi prince of Transylvania invited him to Sárospatak. Comenius remained there until 1654 as a professor at the first Hungarian Protestant College; he wrote some of his most important works there. 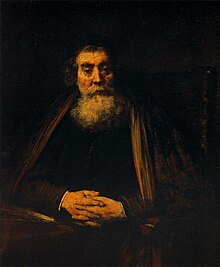 Portrait of an Old Man byRembrandt, possibly a depiction of Comenius

Comenius returned to Leszno. During the Northern Wars in 1655, he declared his support for the Protestant Swedish side, for which Polish partisans burned his house, his manuscripts, and the school's printing press in 1656. From Leszno he took refuge in Amsterdam in the Netherlands, where he died in 1670. For unclear reasons he was buried in Naarden, where visitors can see his grave in the mausoleum devoted to him.

After his religious duties, Comenius's second great interest was in furthering the Baconian attempt at the organization of all human knowledge. He became one of the leaders in the encyclopædic or pansophic movement of the seventeenth century, and, in fact, was inclined to sacrifice his more practical educational interests and opportunities for these more imposing but somewhat visionary projects. In 1639, Comenius published his Pansophiæ Prodromus, and in the following year his English friend Hartlib published, without his consent, the plan of the pansophic work as outlined by Comenius. The manuscript ofPansophia was destroyed in the burning of his home in Leszno in 1657. The pansophic ideas find partial expression in the series of textbooks he produced from time to time. In these, he attempts to organize the entire field of human knowledge so as to bring it, in outline, within the grasp of every child.[8]

According to Cotton Mather, Comenius was asked by Winthrop to be the President of Harvard University, this being more plausibly John Winthrop the Younger than his father since the junior Winthrop was in England; but Comenius moved to Sweden instead.[11][12] Comenius also attempted to design a language in which false statements were inexpressible.[13] A new Dutch translation of his Janua Linguarum Reserata by C.F.J. Antonides is available.

Comenius produced a new edition of the 1618 Bohemian Brethren hymnal, Kancionál, to jest kniha žalmů a písní duchovních (Amsterdam, 1659), containing 606 texts and 406 tunes. In addition to revising the psalms and hymns, his revision greatly expanded the number of hymns and added a new introduction. This edition was reissued several times, into the nineteenth century. His texts in Czech were notable poetic compositions, but he used tunes from other sources. He also edited the German hymnal Kirchen-, Haus- und Hertzens-Musica (Amsterdam, 1661), which had been published under the title Kirchengesänge since 1566. In other writings, Comenius addresses both instrumental and vocal music in many places, although he dedicated no treatise to the topic. Sometimes he follows the medieval mathematical conception of music, but in other places he links music with grammar, rhetoric, and politics. Musical practice, both instrumental and vocal, played an important role in his system of education.[14] 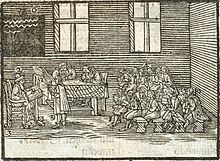 The most permanent influence exerted by Comenius was in practical educational work. Few men since his day have had a greater influence though, for the greater part of the eighteenth century and the early part of the nineteenth, there was little recognition of his relationship to the current advance in educational thought and practice. The practical educational influence of Comenius was threefold. He was first a teacher and an organizer of schools, not only among his own people, but later in Sweden, and to a slight extent in Holland. In his Didactica Magna (Great Didactic), he outlined a system of schools that is the exact counterpart of the existing American system of kindergarten, elementary school, secondary school, college, and university.[8]

In the second place, the influence of Comenius was in formulating the general theory of education. In this respect he is the forerunner of Rousseau, Pestalozzi, Fröbel, etc., and is the first to formulate that idea of "education according to nature" so influential during the latter part of the eighteenth and early part of the nineteenth century. The influence of Comenius on educational thought is comparable with that of his contemporaries, Bacon and Descartes, on science and philosophy. In fact, he was largely influenced by the thought of these two; and his importance is largely due to the fact that he first applied or attempted to apply in a systematic manner the principles of thought and of investigation, newly formulated by those philosophers, to the organization of education in all its aspects. The summary of this attempt is given in the Didactica Magna, completed about 1631, though not published until several years later.[8]

The third aspect of his educational influence was that on the subject matter and method of education, exerted through a series of textbooks of an entirely new nature. The first-published of these was the Janua Linguarum Reserata (The Gate of Tongues Unlocked), issued in 1631. This was followed later by a more elementary text, the Vestibulum, and a more advanced one, the Atrium, and other texts. In 1658 the Orbis Pictus was published, probably the most renowned and most widely circulated of school textbooks. It was also the first successful application of illustrations to the work of teaching, though not, as often stated, the first illustrated book for children.[8]

These texts were all based on the same fundamental ideas: (1) learning foreign languages through the vernacular; (2) obtaining ideas through objects rather than words; (3) starting with objects most familiar to the child to introduce him to both the new language and the more remote world of objects; (4) giving the child a comprehensive knowledge of his environment, physical and social, as well as instruction in religious, moral, and classical subjects; (5) making this acquisition of a compendium of knowledge a pleasure rather than a task; and (6) making instruction universal. While the formulation of many of these ideas is open to criticism from more recent points of view, and while the naturalistic conception of education is one based on crude analogies, the importance of the Comenian influence in education has been recognized since the middle of the nineteenth century. The educational writings of Comenius comprise more than forty titles. In 1892 the three-hundredth anniversary of Comenius was very generally celebrated by educators, and at that time the Comenian Society for the study and publication of his works was formed.[8]